Using variety of criteria like cast, religion, or profession

The WWIMB in the personalized service industry, is the largest of its kind in North America established for over 20 years with a excellent reputation for personalized matches.

The Worldwide Islamic Marriage Bureau was started in 1987 in the City of Toronto in response to the Muslim community`s demand for a service to assist North American Muslim professionals and non-professionals find suitable matches for matrimony. As the Muslim population is scattered throughout North America, the bureau thus became the medium which linked eligible candidates for the purpose of marriage. The response and support we received from North America`s Muslim community, and its leaders, for the great service this bureau provided the community, launched the prospective of a growing future for the bureau.

She was in Ottawa and he was in Toronto. We looked at their specific intere... 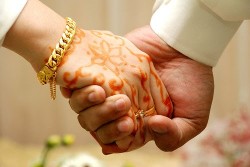 He was in New York and she was in Toronto. We looked at their requirements ...

The WWIMB was founded by Mrs. Fazal Khan, who has lived in Canada for over thirty eight years, and is reputed in the South Asian-Muslim community as "amongst the most trustworthy matchmakers in North America". Mrs. Fazal Khan hails from a notable Urdu speaking Muslim family from Hyderabad, Deccan. Her father, Syed Yusufuddin founded Hyderabad, Deccan`s first Urdu newspaper the Rahnuma e-Deccan. Syed Yusufuddin and his family are mentioned in the book Nobles of Hyderabad; which contains the names and brief histories of the leading forty noble families of Hyderabad, Deccan.